I Love My Library: Magic at Skyway Library


This week I did my first Sing With Our Kids event at the brand new Skyway Library (part of the King County Library System). With my new partnership agreement in place and a plan to hold family sing-alongs every second Friday at four o’clock for the next few months, we were off and running. My plan is to listen, and watch, and learn from this very diverse community, as I build on what I have learned during the last four years of the Mercer Island Project. Boy was I in for a surprise! 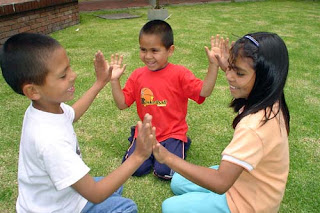 When I arrived to set up for our first sing-along (advertised for families with young children), there was a group of teens hanging out in the meeting room and on their mobile devices. We told them there would be a children’s program starting soon, expecting they would leave. But they stayed. Only a couple of families arrived for my event, so we just settled in on the opposite side of the room and began singing. I could see a couple of the teens starting to mimic me, so I invited them to join us (again, thinking they would just leave). To my surprise, most took me up on the offer!  I pulled out some all-age camp songs, and read a couple of books I had brought, Don’t Squish the Sasquatch, and Tanka, Tanka, Skunk. Both are great read-alouds that are smart and clever and amusing, and appeal to all ages.

Then I decided to really go for it. I asked the teens if they wanted to “help” with the parachute. One asked, “Do we get to sing Ring Around the Rosy?” and another asked if they could run under it. We played and sang for an hour, and the little kids watched the teens and everyone just had fun.

When everyone had left, Mary the librarian and I looked at each other and just said, “Wow!” That was not what we had expected! These teens were hungry to play, and all it took was an invitation.

I love the library because it is safe and welcoming, and anything can happen. You just never know. And now as I look forward to building a relationship with Skyway through Sing With Our Kids, I find  myself dreaming not only of nurturing early literacy and parenting, but of holding events that include all ages. After all, music is the great connector, and anything can and does happen at the public library. You just never know.