Early Literacy from an Empty Kleenex Box and a Song

The best games and activities are the ones that children invent during the process of self discovery. My granddaughter discovered that she could drop some small toys into an empty Kleenex box and shake it to make sound. The plastic stretched across the top kept the toys from falling out. She then started singing to the rhythm. It was brilliant (let's face it- children are brilliant)! She generously allowed me to start singing the ABC song, shaking the box in rhythm until we would stop in the middle, reach into the box, and pull something out. Seeing a opportunity, I suggested we put her magnetic letters in the box. When she stopped and she pulled a letter out, I named it along with a couple of words starting with that letter. And just like that we had played rhythm, shaken the box to match the syllables in the song, named letters, and words. All of this from an empty Kleenex box that would have been discarded by anyone but a small child! Who says early literacy is dry and boring?We played until it was time for the Kleenex box to become something else. And that's how the magic happens! Download the ABC song and get more ked-tested ideas from the "Gift Shop" page on SingWithOurKids.com    https://singwithourkids.com/giftshop.htm 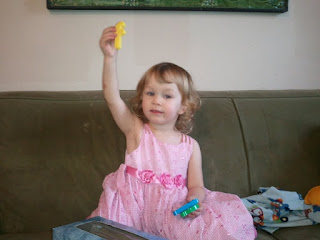 Posted by Nancy stewart at 9:29 PM